HBO’s American drama ‘Lovecraft Country’ tells us the shocking story with the help of their creator Misha Green who is previously acclaimed for “Underground.” She goes on to tell us how it is not only about horror and how the fear, risks, and danger goes beyond the domain of just being a metaphor or serving as a medium of symbol. The series is actually a statement on the relationship shared among different American races.

‘Lovecraft Country’ sets foot on HBO on 16th August 2020. The Jordan Peele and J.J. Abrams-produced show entails not only racial commentary but also stitch together witches and vampires in the world and beyond. The series well defines the story of two interconnecting Black families who travel all around Jin Crow North. Their journey is not an ordinary one as they encounter dreadful monsters, some grotesque creatures like gray beasts who are apparently called Elder Gods and besides them, there are toxic racist sheriffs and attacking oligarchs who even though are set in reality dimensions unlike their counterparts, seem to possess equal threat. 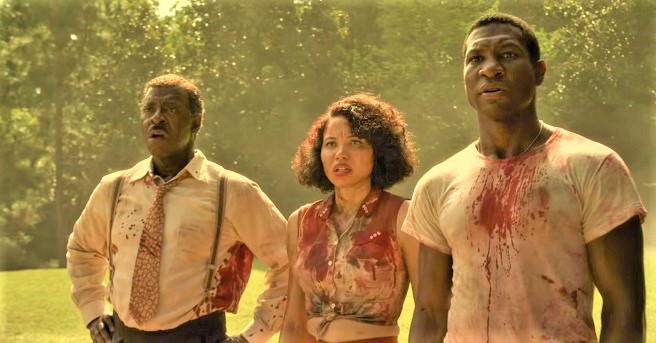 Lovecraft Country – What is the show all about?

The plot circles around the life of Atticus (Jonathan Majors), who is an Army veteran and is looking for his missing father (Michael Kenneth William). Atticus is seen carrying a copy of “The Safe Negro Travel,” which is actually a fictional version of the real-life book by Victor Hugo Green, “The Negro Motorist Green Book.” Besides Atticus, we come across his uncle George (Courtney B. Vance) and his friend Letitia (Jurnee Smollett). They navigate their journey through New England of the mid-1950s.

Similar to Jordan Peele’s “Get Out,” there are otherworldly happenings in the show, along with societal trouble. We are acknowledged with this vivid comparison wherein when one is anxious, and one fears that he/she may lose his/her life, which is similar to the mere act of living an ordinary life by a Black person. The show certainly features cosmic horror along with giving you goosebumps as and when the story progresses further. The characters in the show are simply cynic, and the demons are shown as wildly moving images.

The show does justice while telling the story from a historical point of view. However, it is too difficult to put it under one category as the nature of this show is to explore various categories, among which one of them being paranormal activities. For some people, the fearsome creatures might possess a threat even while watching the same. However, we can always look upon the minute detailing that is evident from the show like the division in buses, segregated entries as the picture of Sundown towns as it is laid forth. We are extremely excited to go down the journey of this pulp fiction. Are you?

Netflix’s Sound Logo could have been a 'Goat Sound'?